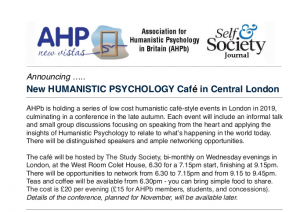 AHPb is holding a series of low cost humanistic café-style events in London hosted by The Study Society. These events will culminate in a conference in the late autumn. Each event will include an informal talk and small group discussions focusing on speaking from the heart and applying the insights of Humanistic Psychology to relate to what’s happening in the world today. There will be distinguished speakers and ample networking opportunities. Read more…. 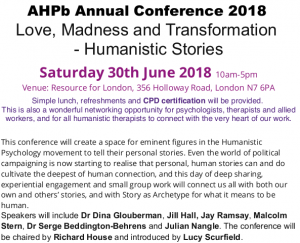 This conference will create a space for eminent figures in the Humanistic Psychology movement to tell their personal stories. Even the world of political campaigning is now starting to realise that personal, human stories can and do cultivate the deepest of human connection, and this day of deep sharing, experiential engagement and small groupwork will connect us all with both our own and others’ stories, and with Story as Archetype for what it means to be human.Speakers will include Dr Dina Glouberman, Jill Hall, Jay Ramsay, Malcolm Stern, Dr Serge Beddington-Behrens and Julian Nangle. Read more… 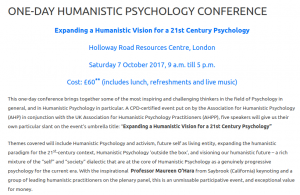 Themes covered will include Humanistic Psychology and activism, future self as living entity, expanding the humanistic paradigm for the 21st-century context, Humanistic Psychology ‘outside the box’, and visioning our humanistic future – a rich mixture of the “self” and “society” dialectic that are at the core of Humanistic Psychology as a genuinely progressive psychology for the current era. With the inspirational Professor Maureen O’Hara from Saybrook (California) keynoting and a group of leading humanistic practitioners on the plenary panel, this is an unmissable participative event, and exceptional value for money. Read more… 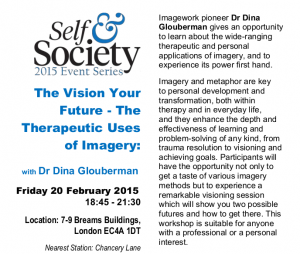 A series of evening workshops was held in 2015, starting with “The Vision Your Future – The Therapeutic Uses of Imagery” by Dr Dina Glouberman. 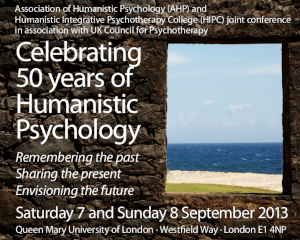 The current Self & Society Poetry Editor, Julian Nangle, organised AHPb events and festivals in the past. Long-time AHPb member and founder of ‘Pathways’, Mary Fee, also has memories of AHPb’s past events. Julian writes:

The first Green and Away Festival was on 27–29 July 2007, and proved a big success, raising £4,000. Of course the late John Rowan was a guest speaker on at least two occasions; other speakers were Guy Gladstone and Martin Wilks. At the first Festival we had Vivian Milroy (founder of Self & Society for AHP), who did a Dance & Mime Encounter Group! Other contributors to the festivals included Maxine Linnell (who was the person who first suggested having a festival in 2007; and there were also workshops from myself (on Past Life Therapy) and Anna Nangle (on Dancing the Chi). Josephone Sellers offered Equine Therapy (which was a big hit), and Katy Murrell offered Yoga.

At at least two of the festivals we had the band Seize the Day to help us celebrate all that we believed in. We also had drumming (Nick Wise), singing (Jane Wise) and story telling (with Joy Pitt, I believe). Of course we also had a wonderful facilitative process present at all the festivals, using the Home Groups model – something I would thoroughly recommend if ever there was another festival organised.

The final festival was back at Green and Away on 16–18 July 2010. In addition to previous-mentioned speakers we had Jocelyn Chaplin, Brigitta Mowat (Working with Chakras), with Jenny Nicholson doing a workshop on Joanna Macey’s work, Ba Wheeler doing some Taize singing, and Pauline Elwell doing an Earth Walk. Recalling these festivals today, I can only say they were FANTASTIC events! And by common consent, these festivals were deemed a great success.’

I remember going to Green & Away, it seems a very long time ago! When Stella Barclay was involved, shortly before her job took her to North Yorkshire, we used to organise monthly workshops in London which were modest, affordable affairs – maybe only £5 or £10; I think this must have been in the early 1980s before my daughter was born in 1986, certainly before the days of Pathways, which I think began in 1988. For some of them we used London’s Open Centre as a venue. I recall that they were advertised in a small newsletter that was distributed as an insert in Self & Society at that time. I remember early work being done on an Amstrad! Below is the 1988 programme of events: 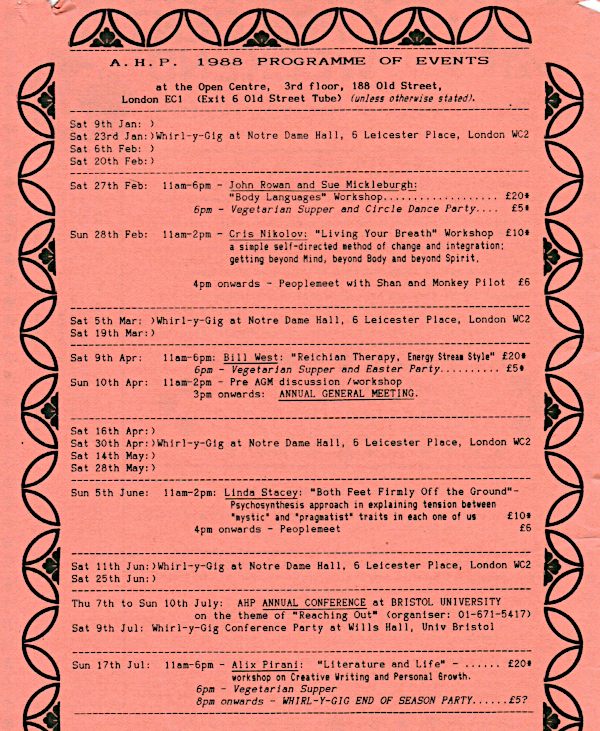 For three successive years, conferences were organised at Wentworth Woodhouse, a large stately home in Rotherham. Here are the flyers for 1985 and 1986, and one for a conference in Bristol in 1988: